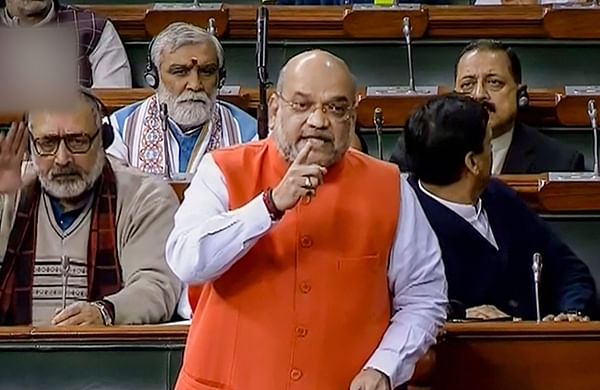 NEW DELHI: Union Home Minister Amit Shah on Monday asserted that the Citizenship (Amendment) Bill 2019, which seeks to give Indian nationality to non-Muslim refugees from Pakistan, Bangladesh and Afghanistan who were facing religious persecution there, has the endorsement of the people as it was part of the BJP manifesto.

Seeing the opposition to the Bill in the Northeast region, the BJP-led government has decided to exempt parts of the area which are under the sixth schedule of the Constitution – which deals with autonomous tribal-dominated regions in Assam, Meghalaya, Tripura and Mizoram.

The bill will also not apply to states that have the inner-line permit regime (Arunachal Pradesh, Nagaland and Mizoram).

Trying to allay apprehensions of the people of Northeastern region, Shah said the Narendra Modi government was committed to protecting the customs and culture of the people of the region and informed that Manipur will be brought under Inner Line Permit regime.

"Citizenship amendment bill has the endorsement of 130 crore citizens of the country as it was the part of the BJP manifesto in 2014 as well as 2019 Lok Sabha elections," he said, initiating the debate on the contentious bill.

"We will have to differentiate between intruders and refugees. Citizenship amendment bill does not discriminate against anyone and does not snatch anyone's rights," he said.

The Citizenship (Amendment) Bill on Monday cleared the first test in the Lok Sabha, with 293 members voting in favour of the bill's introduction and 82 against it.

Union Home Minister Amit Shah introduced the contentious Bill in the Lok Sabha and said that it is not even 0.001 per cent against the minorities in the country.

"This Bill is not even 0.001 per cent against minorities in the country," Shah said in the House, amid much uproar by the opposition.

"If any Muslim from these three (Afghanistan, Pakistan, Bangladesh) nations applies for citizenship according to our law, then we will consider it, but the person won't get the benefit of this amendment as the person has not faced religious persecution," he further said.

"Sikhs, Buddhists, Christians, Parsis and Jains have been discriminated against. So this bill will give these persecuted people citizenship. Also, the allegation that this bill will take away the rights of Muslims is wrong," Shah said.

Through this bill, Indian citizenship will be provided to the members of Hindu, Sikh, Buddhist, Jain, Parsi and Christian communities, who have come from the three countries to India till December 31, 2014, to put an end to them being treated as illegal immigrants in the country.

It is important to note that the Bill was passed by the Lower House of the Parliament earlier this year but lapsed with the term of the previous Lok Sabha during the first term of the Prime Minister Narendra Modi government in the Centre.