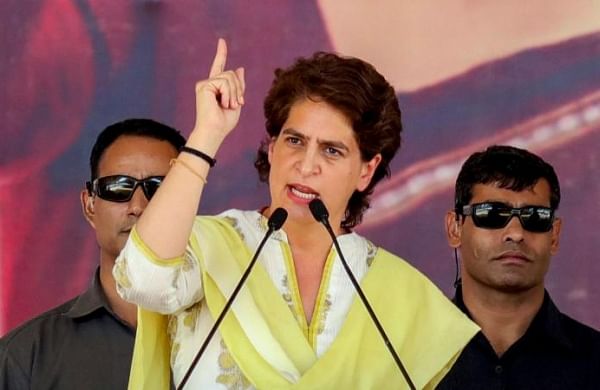 LUCKNOW/BALLIA: Congress general secretary Priyanka Gandhi Vadra on Sunday asked the BJP whom it is backing in the Ballia murder case where its local party leader allegedly shot a man dead in the presence of an SDM and police three days ago.

The incident had taken place on Thursday during a meeting over the allotment of ration shops at Durjanpur village in Ballia's Reoti area.

The Uttar Pradesh government had suspended the SDM, circle officer and other policemen present at the spot.

Police arrested Dhirendra Pratap Singh and two others in connection with the case on Sunday. So far, eight people have been arrested in the case.

Slamming the BJP in a series of tweets, Priyanka Gandhi accused a ruling MLA of backing the accused.

"With whom the BJP government is siding in the Ballia incident," she asked, adding that the BJP MLA is openly supporting the accused. In another tweet, she sought to know from Prime Minister Narendra Modi, Union Home Minister Amit Shah and BJP national president JP Nadda as to whether they are with the BJP MLA.

"If not, then why he is still with the BJP," she asked.

"Priyanka has a dual character. She should have tweeted on senior Congress leader P Chidambaram on the issue of Article 370 in Kashmir. People with dual character are not successful in politics and society," he told reporters here.