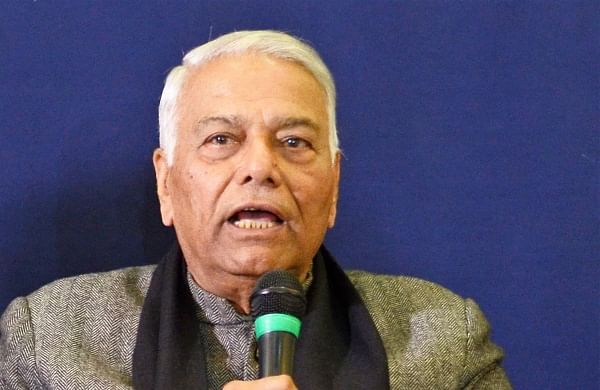 NEW DELHI: Yashwant Sinha - the common presidential candidate of Opposition assured the nation on Wednesday that if he is elected, he, as the custodian of Constitution, would not allow the light of democracy and secularism to get dimmed in the country.

"I assure the People of India-that, if elected, I shall conscientiously uphold, without fear or favour, the basic values and guiding ideals of the Indian Constitution. In particular, as the Custodian of the Constitution, I shall not allow the light of democracy and secularism to be dimmed by the executive," Sinha promised in a statement.

Taunting sarcastically at the Modi government indirectly, he also averred that he would not allow the independence and integrity of democratic institutions to be weaponised against political opponents as is happening now. "I shall do my utmost to ensure that the majesty of Indian Parliament will remain safe from attacks by the forces of authoritarianism," he claimed further in a statement.

Taking a swipe ,albeit indirectly, on the Modi government, Sinha alleged that the ongoing attacks on the federal structure of the Constitution, whereby the government is attempting to rob the state governments of their legitimate rights and powers, will be treated as totally 'unacceptable'.

Taking a resolve against the ill-gotten money, Sinha further said: "I shall also use the authority of my office to check the menacing power of ill-gotten money that is killing the soul of Indian democracy and making mockery of people's mandate in elections. India is going through extremely difficult times. I shall raise my voice for the common people-Kissan, workers, unemployed youth, women and all marginalised sections of society."

Putting an extra emphasis, he said that this is not a contest of individuals. “I have great regard to Smt Droupadi Murmu, who has been chosen by the BJP as its candidate for the Presidential election. I have had the pleasure of interacting with her when she was the Governor of Jharkhand," Sinha said, wishing her well in the election.

Sinha further stated that the presidential election is battle between two opposing ideologies.

"Leaders of one ideology are hell-bent on throttling the Constitution. They believe that India's Rashtrapati should not function with a mind of her /his won and should merely serve as a rubber stamp to do the government’s bidding," he said.

He added that he was proud of himself for belonging to other ideology that is determined to save the Constitution and the Republic. He said that he will file his nomination on June 27 and state visiting the state capitals for meeting with MPs, MLAs and others. "Above all, I also seek support and guidance of Janata Janardan - the people of this great nation," Sinha said.