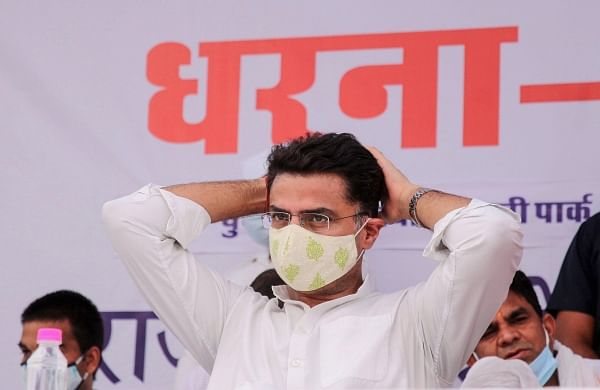 NEW DELHI: Asserting that neither former Rajasthan deputy chief minister Sachin Pilot nor the MLAs supporting him have spoken against the top Congress leadership or the party, three legislators backing Pilot on Tuesday said their fight is about "self-respect", and against the "dictatorial" working style of Chief Minister Ashok Gehlot.

Hemaram Chaudhary, a six time MLA and a former Congress legislative party leader, said,"we are true soldiers of the Congress and our fight is not against the party, but we cannot work under Gehlot's leadership".

The chief minister himself has stated that he was not on talking terms with the deputy chief minister, so it is for all to see that what kind of a government he was running, the senior Rajasthan Congress leader told PTI.

The assertion by senior leaders in the Pilot camp came hours after Congress' chief spokesperson Randeep Surjewala said that dissident MLAs should give up the hospitality of the BJP and the security of Haryana police if they want to hold a dialogue with the party.

On Saturday, Gehlot in Jaisalmer said that he has no issues with any of the rebels if they apologise to the party high command.

The state chief minister also said that he would abide by whatever the leadership decided about them.

Gehlot has accused Pilot and those supporting him of colluding with the BJP to topple his government by allegedly engaging in horse-trading.

Chaudhary said the current standoff within the party in Rajasthan was not the outcome of a single event, but the result of one and a half years of "humiliation and systematic marginalisation" of Pilot within the Gehlot government.

"The continuous public humiliation of our leader (Pilot), sidelining of those close to him, constantly hampering work of the deputy chief minister and depriving him of authority has led to this situation," the MLA from the Gudamalani constituency in Barmer said.

"We could not bear it after a point and the last straw was the serving of a notice by the state police, that too on 'sedition charges' to the sitting deputy chief minister," Chaudhary said.

The MLA hit out at the AICC office bearers dealing with Rajasthan, particularly state in-charge Avinash Pande, alleging that they were completely biased against Pilot and his supporters, and not willing to address their grievances even after repeated attempts over the last 18 months.

He said it was never about opposing the party or its national leadership, but those MLAs supporting Pilot were against the "dictatorial leadership style" of the individual heading the government.

"Surely criticising leadership style of Gehlot can't be a good enough reason for the party to unceremoniously sack Mr Pilot as Deputy CM and PCC president," the MLA said.

Hitting out at Gehlot, Chaudhary cited an RTI inquiry to allege that in the first year of office, zero amount of money was spent on TV/Newspaper advertisements on Pilot, whereas the state government spent more than 25 crore on the publicity of Gehlot.

"Another RTI showed that the CM in the first year of office had used the state aircraft as many as 85 times, while the number of such trips for Mr. Pilot was zero. In fact the details show that Mr. Pilot had not travelled by air on official expense, even once," he claimed.

"While making political appointments, official programmes of the state government, transfers and postings of bureaucrats, allocation of funds, the bias against Pilot was there for all to see. The CM chose to target those close to Pilot and the vindictive manner in which CM opposed anyone not paying obeisance to him, was suffocating," Chaudhary said.

He said watching Pilot, who worked from panchayats to block and district levels to revive the party's fortunes, being sidelined in the government was "heart wrenching" for many party workers.

"Ashok Gehlot tried to portray our grievances as anti-party act or a betrayal of sorts, but the fact is that it is a fight for self respect, honour and our own space in the party and the government which we toiled for five long years to creat," the MLA from Chaksu told PTI.

Indraj Singh, an MLA from Viratnagar, alleged that Gehlot did not allow them to raise issues of farm loan waiver or employment of youth.

"Our fight is about hurt and anger over being sidelined by one person. It is a fight for our self respect and we will not compromise on that," he said.

He said people raising their voice with Pilot were cabinet ministers, a former speaker, and senior Congressmen belonging to various parts of Rajasthan representing a cross section of society and caste combination.

"These people don't deserve to be elbowed out of the party on the whims of one person," the MLA said, in an obvious reference to Gehlot.

The three MLAs also demanded that that party should remove Gehlot and make Pilot the chief minister to "save the party" in the state.

Nineteen Congress rebels, including Pilot, revolted against Gehlot, posing a threat to the Congress government in Rajasthan.

However, Gehlot has asserted that he has the support of majority MLAs.

Pilot and the MLAs supporting him have stated earlier that they are not joining the BJP and want a leadership change in the government.

Meanwhile, the Special Operations Group of Rajasthan police, probing into the cases of alleged horse-trading of the Congress MLAs aimed at toppling the Gehlot government, on Tuesday transferred them to the state's Anti-Corruption Bureau, saying no case of sedition is made out.

A statement by ATS and SOG wing of the state police said all documents pertaining to the three cases registered by it last month were transferred to the ACB on legal advice.

The legal advice said that no case of sedition under section 124 A of the Indian Penal Code was committed and the offences pertained to the Prevention of Corruption Act to be probed by the ACB, the SOG statement said.

"Prima facie, the crime was proved to be committed under the Prevention of Corruption Act. Hence the case papers and all other documents have been sent to the ACB for further necessary action," the statement said.

The SOG had registered the first FIR on July 10 under IPC sections 124-A and 120-B and two persons were arrested in the case.

Later on July 17, two more FIRs were registered by the SOG on charges of sedition and criminal conspiracy on a complaint by Congress Chief Whip Mahesh Joshi.

The SOG had arrested an alleged middleman, Sajay Jain, on July 17 and a court had remanded him in police custody for interrogation.

In an audio clip, he was purportedly heard talking to Congress MLA Bhanwarlal Sharma and one Gajendra Singh, who the Congress claims, is Union minister Gajendra Singh Shekhawat.

Sanjay Jain was allegedly acting as a middleman and the Congress claims he is a BJP leader while the BJP has rejected the allegation saying Jain has no association with it.