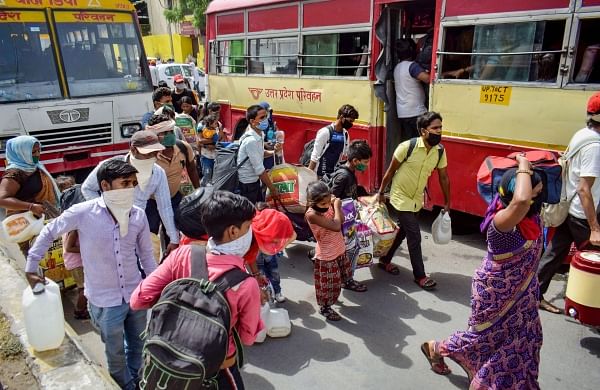 LUCKNOW: The Yogi Adityanath government may not include the clause concerned with seeking state’s permission before hiring the workforce from Uttar Pradesh in the proposed Migration Commission’s by-laws.

The decision was taken after high-level discussions on the bylaws on Wednesday.

At a webinar on Sunday, CM Yogi Adityanath had announced that given the ‘inhuman conditions’ in which UP migrants had been living in many other states, any state wanting to hire manpower from Uttar Pradesh would have to come through the Commission and seek state government’s permission.

The CM had also stressed upon the protection of migrants’ rights and ensuring social security to them through insurance and other policies.

However, after discussing the bylaws for the Commission threadbare, the government indicated on Wednesday that its only purpose was to ensure jobs for the migrant workers even outside the state.

“The social security for the migrants was the prime concern of the CM,” said a senior government official.

A government spokesperson said the aim was to ensure that UP workers were not exploited anywhere, either in UP or in other states. “By setting up the Commission, the government intends to guarantee jobs, basic rights and social security through insurance or ration cards.”

UP has witnessed a huge influx of migrants from across the country. So far, the state has received the highest number of laborers – around 26 lakh during the lockdown. Another 4-5 lakh are expected by the end of May.

“The skill mapping of the migrants coming to UP is undergoing at war footing as the CM has set a 15-day deadline to complete the task. Over 16 lakh migrants have been mapped on the basis of their skills,” said the officer.

“Many of them had lost jobs and had not been paid salaries. We have to see that it is not repeated with them again in future.”

In good news, some industrial units in the state sought five lakh workers from the skill mapping data bank. According to an official spokesman, UP CM Yogi Adityanath directed authorities to coordinate with various industrial units and ask them to absorb at least 1-10 migrant labourers as per their skill.

At his routine review meeting of Team 11 on Wednesday, the CM directed the officials to provide all help and facilities to the entrepreneurs.