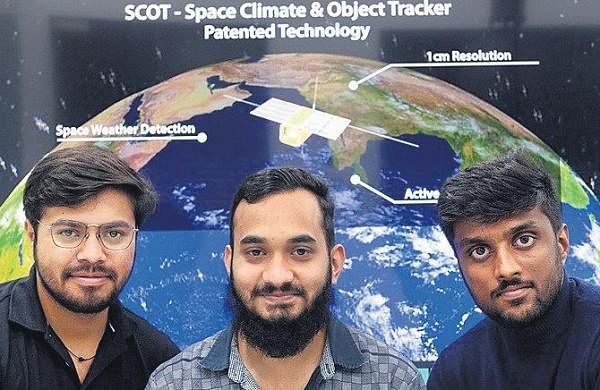 NEW DELHI:  The race to space has the downside of polluting it. A Bengaluru-based start-up plans to send out a constellation of 40 satellites that will gather data on space junk in the low-earth orbit (LEO).
The satellites that will be launched in early next year will gather information on millions of pieces of debris that litter LEO, which NASA describes as an “orbital space junk yard”.

Digantara, the start-up launched by three young engineers, has taken upon itself the mission to help clean up LEO.

Space junk can reach speeds of up to 18,000 miles per hour, according to NASA. Many of them range from 1 cm to 10 cm in diameter. Most of this orbital debris comprises “human-generated” objects such as parts of spacecraft that have long disintegrated, rocket and satellite components, and very small flecks of paint from spacecraft and whole satellites.

“The ones which are 1 cm in diameter are estimated to be a million. Besides, international space agencies have determined that they are aware of only 4 per cent of objects in space. The data for 96 per cent is still missing,” said Digantara chief operating officer Rahul Rawat, who is only 23 years old.

Digantara, which is incubated at Bengaluru’s Indian Institute of Science, sent out a small satellite, a payload about the “size of a shoe box”, according to the start-up’s CEO Anirudh Sharma, on June 30 this year to gather information on space weather, including radiation, violent storms and other phenomena that can be potentially harsh for spacecraft and burn or fry them.

While this lone satellite has been sending out data to ground sensors, Rawat pointed to Elon Musk’s SpaceX Starlink constellation of 40 of 49 satellites that were “lost in a single blow” when they encountered a gigantic “solar paroxysm” that burned the spacecraft and cost the company $100 million in February 2022.

It is precisely to avoid satellites getting caught up in such “solar outbursts” or other violent geomagnetic incidents that Digantara expects its own satellites – and the information it will send back to its ground sensors – to come to the rescue of space companies with ambitions of sending out satellites.

“We are the only start-up of its kind in India though there are competitors in the US and Canada,” Rawat said, adding the gathered data can help firms that are into remote sensing and insurance where risk analysis reports will be important.

(THE NEW INDIAN EXPRESS)
95 Days ago